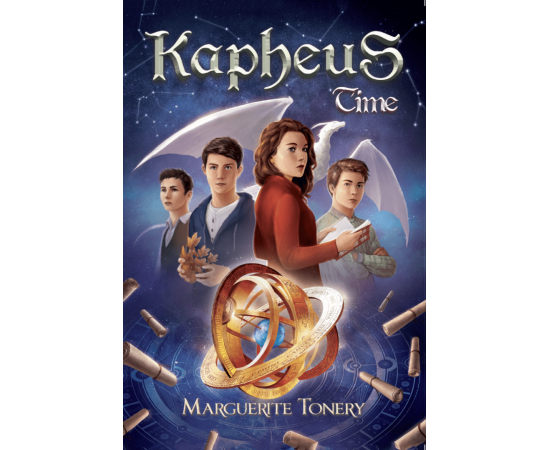 It is the rugged landscape of the west coast of Ireland that inspired the author, Marguerite Tonery, to create the fantasy world of Kapheus. The legends of Ireland, including the warriors of Tuatha De Danann and the great Setanta, the leprechauns, fairies and so many other mythological creatures has created a wild and wonderful world between the covers of Kapheus.

Kapheus is the spiritual home of Éire (Ireland) and that it holds the traditions, culture and language until Éire is ready to reclaim them. The Spiral of Life commonly known as the Triskel weaves its way through the books all the way to the Hill of Tara known as the Soul of Ireland.  Join Marguerite as she reveals the myths and legends of Ireland to you in the Kapheus series of books.

You will be brought from the Aran Islands along the Wild Atlantic Way to the Cliffs of Moher, the Burren, and across the land of Ireland to the Hill of Tara as you turn the pages of this fantasy adventure series.

Elisa is caught in the cross-fire as she is duped by old man Time himself in his attempt to settle an old score. He slips the armillary sphere into her pocket, and now, with the most powerful instrument in the universe, Elisa must find a way to return it before it’s too late. Both she and Jamie with the help of a gargoyle called Conchobhar, a dragon called Dara and their long-time friend, Setanta, set out on the quest together, time travelling through history and legend in search of Time.

If they fail, they will be lost forever and Elisa will take on the mantle of Time. However, if they succeed, the outcome is certain death, but the decision on who will die rests in the hands of Time. The time travellers must find a way to save whomever they can while trying to resist reweaving time’s delicate fabric.

Thrilling, thought-provoking and mesmerising. This is the adventure of a lifetime – Fallen Star Stories.