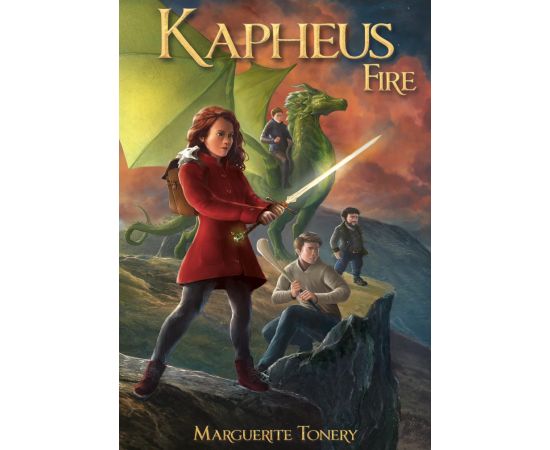 It is the rugged landscape of the west coast of Ireland that inspired the author, Marguerite Tonery, to create the fantasy world of Kapheus. The legends of Ireland, including the warriors of Tuatha De Danann and the great Setanta, the leprechauns, fairies and so many other mythological creatures has created a wild and wonderful world between the covers of Kapheus.

Kapheus is the spiritual home of Éire (Ireland) and that it holds the traditions, culture and language until Éire is ready to reclaim them. The Spiral of Life commonly known as the Triskel weaves its way through the books all the way to the Hill of Tara known as the Soul of Ireland.  Join Marguerite as she reveals the myths and legends of Ireland to you in the Kapheus series of books.

You will be brought from the Aran Islands along the Wild Atlantic Way to the Cliffs of Moher, the Burren, and across the land of Ireland to the Hill of Tara as you turn the pages of this fantasy adventure series.

“I saw them fly across the sky spitting flames of fire as tall as trees and then the wind changed direction, and everything was still for what seemed an eternity and… clocks! There were clocks everywhere!”

Mother Badger has a prophetic dream and risks her life to warn Elisa and Jamie. The phoenix has flown and the enemy from Fodar is in search of Geaspar the newly born dragon. Is the dragon safe? Will the thief have his way? Can Elisa count on Jamie to help? All will be revealed on the night of the blood moon when the Fodar army attacks.

Nothing is what it seems, and true Kaphien heroes reveal themselves in the most unexpected ways…